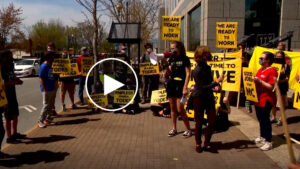 Beautiful actions from coast to coast

This plan is a critical piece of Biden’s agenda, so urgently needed as our communities are still picking up the pieces of the deadly COVID-19 pandemic and decades of growing wealth inequality. And as with any massive legislation that would help working and middle-class people, you better believe that powerful interests are already trying to stop it.

The truth is that Biden and the progressives in Congress cannot make these plans a reality without the support of people across the country fighting for change. If we want our elected officials to provide a real recovery, we have to come forward. During the two weeks Congress was at home during recess, MoveOn members and allies came together at Recovery Break events across the country to demand solutions that meet the scale of the issues that have been presented to us.—Including green jobs to address climate change, care jobs, healthcare, and all the other kinds of support that Americans desperately need.

And it was beautiful. We got great press coverage, from official local newspapers to national cable news. Watch and share this video montage that highlights some of the 200+ events that made up Recovery Break.

On the streets and at Zoom, MoveOn members across the country appealed directly to their members of Congress, urging them to act big and bold by bringing jobs, care, justice, climate solutions, tribal sovereignty and real democracy to all of our people in the next recovery package.

Here’s a sampling of the variety of actions that MoveOn members helped perform:

With everything our communities have gone through in the last year, both individually and collectively, we know that big changes are absolutely necessary if we are to prosper. After the pandemic, after the insurrection, after a renewed uprising against police violence, through one climate impact after another, it became even clearer that we cannot just go back to the way things were, we must rebuild better and more. strong. than ever before.

We cannot – and will not – return to a norm of crumbling infrastructure, tremendous unemployment, sustained racial and wealth inequalities, and ecological destruction. We need our government to go big and tackle all of these issues together if we have a chance to tackle any of them.

The fight for the true recovery of our country continues. That’s why MoveOn members are rising to seize this once-in-a-generation political moment and win big for climate, care, jobs, justice and democracy.

Click here to watch this video montage of Recovery Recess, then pass it on to your friends to follow the national beat on the call to Congress at #BuildBackBold.

Thanks for all that you do.