Teddy bear! Let’s get smarter. If you think we missed something important, please include the link in the comments below (here is a good example). If you are more of an audio learner, check out The Get More Smarter podcast. And don’t forget to find us at Facebook and Twitter.

* How you can help in Colorado:
COVRN.com

* Colorado residents can now receive a COVID-19 vaccine at one of six locations with out PRIVIOUSE appointment.

► Now that the Pfizer COVID-19 vaccine has received full FDA approval, Republicans are having a hard time trying to figure out where to position themselves on the issue of mandatory vaccines. What The Washington Post Explain:

In the days since FDA clearance and Biden’s call, Republicans who had otherwise fought tooth and nail against vaccine mandates have remained surprisingly quiet about the prospect of employer mandates. And the few who have spoken have generally said that employers should be able to implement them.

The problem has developed in recent weeks and months in several states, with some lawmakers pushing to ban the mandates. But unlike the party’s stance toward school mask mandates, government vaccine mandates, and vaccine passports, there is little cohesion on this issue. So far, only one state bans employer vaccine mandates: Montana …

…[South Dakota Gov. Kristi Noem] He essentially said that conservatives should give companies the freedom to take this step. And that will be a hard pill to swallow for a Republican base that has been fed spoonfuls of anti-mandate rhetoric, often tinged with conspiracy theories, by its leaders for so long.

Supporting preventive bans on vaccine mandates is not really in line with “conservative” ideals of leaving private companies alone to make their own decisions. Governor of Texas Greg abbott, Nevertheless, is plowing forward anyway.

► Congressman Lauren “Q * Bert” Boebert (R-ifle) is facing new calls for investigations related to her strange revelation last week in which she apparently recalled that her husband, Jayson, is paid half a million dollars a year to “consult” for an oil company and gas.

► The redistricting process in Colorado is (finally) approaching its final stages. This is bad news for Republicans, who picked a terrible time to be caught breaking the lobbying disclosure law.

In related news, Bente Birkland from Colorado Public Radio looks at how a supposedly non-partisan redistricting process is being corrupted by partisanship:

Colorado’s new redistricting process was intended to replace politicians with independent commissioners and party interests with public input. But recent events show that there are still many ways that partisans can try to influence the process.

On Tuesday, Democratic attorney Mark Grueskin filed a complaint against three prominent Colorado Republicans, the former state senator. Greg Brophy, former Speaker of the State House of Representatives Frank McNulty and Alan Philp of the Colorado Neighborhood Coalition, claiming they have been trying to influence the state’s redistricting process without properly disclosing their efforts.

The complaint filed on behalf of a voter in Larimer County alleges that the men did not properly register as lobbyists while holding meetings related to redistricting and proposing map ideas, or did not disclose income.

► Colorado Republicans are trying to convince the Mesa County Clerk and Recorder Tina peters to end his time on the run and return to Colorado to face the music for allegedly compromising electoral security in a clumsy attempt to prove some kind of 2020 election fraud. The Washington Post has more on how a crazy conspiracy theory is causing real-world security problems in Mesa County.

The Colorado Attorney General’s Office has joined the Peters investigation. The Colorado Secretary of State’s office, the Mesa County District Attorney and the FBI are already investigating Peters’s misdeeds.

► Senator Michael Bennet (D-Denver) is on tour in Colorado and receives care from residents on concerns about climate change.

In the meantime, Colorado News Chase woodruff reports that Bennet’s re-election campaign in 2022 is progressing alongside strong fundraising and little Republican opposition.

► Ezra Klein from The New York Times offers some wise words on the US withdrawal from Afghanistan:

To state the obvious: there was no good way to lose Afghanistan to the Taliban. A better withdrawal was possible, and our tight-fisted and chaotic visa process was unforgivable, but also worse. Either way, there was no hope for an end to the war that did not reveal our decades of insanity, no matter how deeply America’s belief in its own enduring innocence demanded it. That’s the reckoning underlying events that are still unfolding, and much of the cable news talk is a frenzied, bipartisan effort to avoid it.

To focus on executing the pullout is to give virtually everyone who insisted that we could remake Afghanistan a chance to hide their failures by pretending to believe in the possibility of a graceful exit. It is also obscuring the true alternative to abstinence: endless occupation. But what really reflects our ignominious departure is the failure of America’s foreign policy establishment in both prediction and policymaking in Afghanistan.

► POLITICAL reports that some US troops may have been injured in airstrikes carried out by ISIS on the Kabul airport in Afghanistan.

► Republican candidate for the United States Senate Eli bremer seems to be targeting his campaign in a very small group of right-wing voters. As his campaign demonstrated on Wednesday, he is not trying to be taken seriously as a candidate who can actually win a general election.

► What Colorado Public Radio A Secret Service office in Denver reportedly warned colleagues in Washington DC about the potential for violence ahead of the January 6 uprising.

► What Sandra fish reports for The Colorado sun, a dark money group called United for Colorado that intends to help Republican candidates face the largest fine in state history for doing everything they can to try to keep their donors a secret.

► Greg sargent from The Washington Post writes that House Democrats may have outdone Republicans on two big bills that could undermine the GOP’s efforts to impose more “minority rule.”

► The Colorado sun discusses a marijuana tax increase on the November ballot that is a bit more complicated than it sounds.

► DOES NOT have a “constitutional right” reject the COVID-19 vaccine.

► What Seth masket from the University of Denver writes for POLITICAL, it is unlikely that the withdrawal of US forces from Afghanistan will ultimately prove to be a major problem for Democrats in the midterm elections.

► Governor Jared Polis He says Colorado is not yet on point in the resurgence of COVID-19 in which state mandates are necessary. In the meantime, The Denver Post reports on how concerned health officials are about “breakthrough infections” in Colorado.

► Aurora Public Schools are require COVID-19 vaccinations for all teachers and staff.

► The Denver Post looks at what the future may hold for KP Kaufman, an oil and gas drilling company facing fines of $ 1.8 million for multiple violations.

► The Martin Drake Coal Plant in Colorado Springs will close this week.

What do you say now?

If the Denver Broncos don’t post a winning record in 2021, you know who Rep. Ken buck (R-Greeley) going to blame … 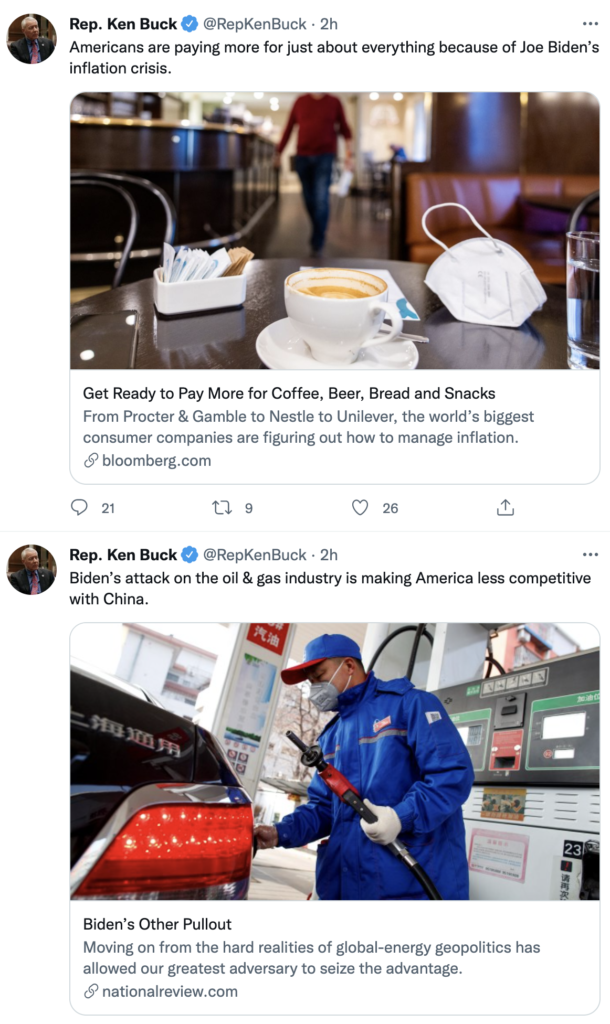 ► Doesn’t this say a lot about Republicans in Congress too?

► Allies of Donald trump they are trying to fool the americans with pretending that Trump’s presidency was totally awesome.

► If you are on the same side as the state representative. Ron Hanks… Then you might consider looking for a new team.

► Maybe you can’t just get away with making ridiculous accusations that are completely devoid of any proof.

► This week in The Get More Smarter podcast, Congressman Ed perlmutter (D-Jefferson County) comes back to discussing some of the great local projects that are funded with federal dollars in Colorado … as long as their member of Congress is a Democrat, apparently.