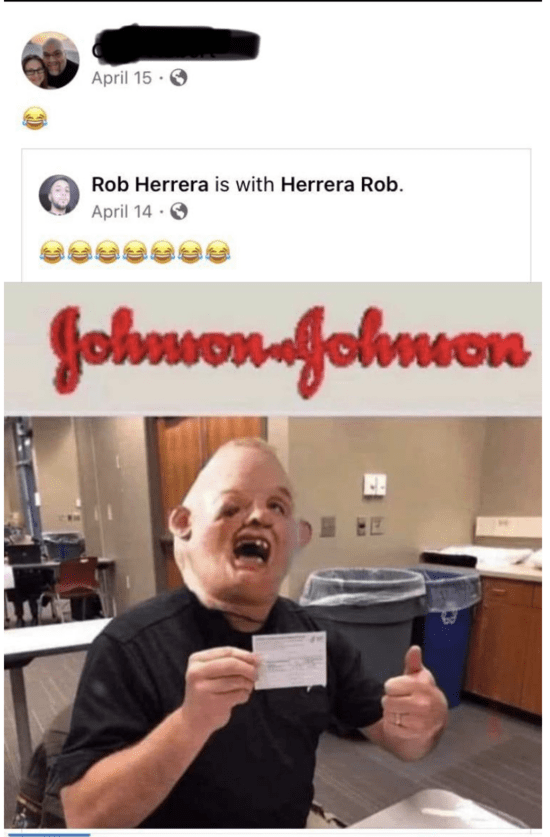 The (tragic) timeline of an anti-vaccine death from COVID

He always begins by making fun of the vaccine and those who take it, and declaring that it is all a hoax.

He drank and partied with his neighbors, even when the scientific community begged people not to. He was lucky, he survived the first wave, and the lack of consequences for his reckless behavior emboldened him to keep laughing at people who behaved responsibly. There is a strange obsession with talking about your “immune system,” as if the immune system had once been a barrier to death from disease.

More mockery of the vaccine.

Finally, all the parties and drinks with the neighbors caught up with him.

You know the old joke, right? The one with the preacher caught in the rising waters of the flood? A boat appears, offers to take him to safety, he refuses, because he trusts that God will save him. The same happens when a second ship arrives. The waters continue to rise, he is in the steeple of his church, a helicopter arrives, he takes him away, he trusts that God will save him. He’s drowning.

Finally, he meets God and asks him why his prayers were not answered. God says, “I sent you two boats and a helicopter, what else was I supposed to do?”

God sent them the vaccine, in record time! And yet they keep praying for salvation.

I chose this story because its tragic end had a ray of light: it recognized too late the folly of remaining unvaccinated. Most of the people in these stories don’t. These people go to the grave clinging to their stories that they were infected by vaccinated people, or that liberal hospitals are killing conservatives by denying them supposedly life-saving treatments like hydroxychloroquine or ivermectin, the antiparasitic for horses.

And yet even his deathbed laments are met with skepticism and a call for wacky remedies made from lemons and grapefruit, but organic! Worse, even when he essentially says “not taking the vaccine killed me”, the answer is “Good thing you did !!!!!!!” That is a disease of the next level.

In the end, these conservatives who “get them off on the right foot” always end up turning to the inevitable GoFundMe page. Always.

None of this is funny. It is not worth mocking. They are not just desserts. By refusing to be vaccinated, these people prolong our national and global misery, while allowing the virus countless new opportunities to mutate and potentially evade existing vaccines. It is crushing the will of our brave and diligent healthcare providers, doctors and nurses, who fought through two waves for unvaccinated times, but now have to suffer delta wave when it is so easy to avoid (and free!).

Maybe, just maybe, enough of these stories will finally shake up these homeless people to reevaluate their behavior and vaccinate, for their communities and families, if not for themselves.