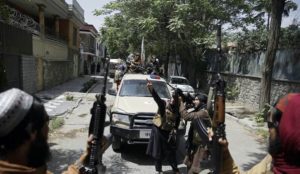 On Monday, Rep. Jody Hice (R-GA) tweeted: “As the Afghan government fell, the Taliban gave US officials the option of taking control of Kabul. They PASSED and instead chose to voluntarily hand over the city to the Taliban and control only the airport until 8/31! HOW MANY MORE COULD HAVE BEEN SAVED?!? “It’s a question we’ll never know the answer to, but Hice had plenty of good reason to ask it. Even the Washington Post, which generally goes to great lengths to make Biden’s handlers look good, reported on saturday that while the Taliban were rampaging through Afghanistan, they gave the United States the option of securing Kabul, which would have allowed untold numbers of people still trapped there now to escape to safety. But Biden’s army refused, opting instead to control only the Kabul airport, leading directly to the disaster we’ve seen unfold in the past two weeks.

The WaPo quotes “a senior American official” as saying: “He not only left his country, but later undid the security situation in Kabul.” However, this official was not referring to the old Joe Biden, but to the president of the Afghan national government backed by the United States, Ashraf Ghani, who fled the country as his army collapsed before the advance of the Taliban.

However, the parallels between Ghani and Biden are numerous. The Post notes that as the Taliban took over city after city in Afghanistan, “Ghani’s inattention to the threat posed by the Taliban puzzled US officials, in particular Marine Corps General Kenneth ‘Frank’ McKenzie, Chief of the US Central Command and Ambassador Ross Wilson. “

These two reportedly tried to pressure Ghani to be more prepared: “In a July meeting with Ghani in Kabul, the two men told the Afghan president that his team needed a ‘realistic, implementable and widely supported plan to defend the country “and that it should abandon the idea of ​​defending the 34 provincial capitals, said an official familiar with the meeting.” The Post quotes an anonymous official as saying: “They had to focus on what they could really defend. All provinces are important, but some were an integral part of Kabul’s defense. “

Hey, that sounds like the stunned occupant of the Oval Office and his awake military minions. In June, CENTCOM Commander General of the Marine Corps Kenneth F. McKenzie Jr. gave an interview to the Military Times in which he confidently stated: “We have workable plans to evacuate at any scale of people indicated to us. . That’s one of the things we’ve done. I have spoken to the secretary about it. “We now know that such plans never existed or were never implemented.