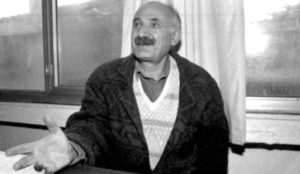 (Originally published in Israel Hayom under the title “Choosing Between Freedom and Islam,” on August 26, 2014.)

This excerpt is from the preface of the first edition of the book “This is Religion” by Turan Dursun.

Dursun’s father was of Turkish descent and his mother of Kurdish descent. Born in Turkey in 1934, he was a former mufti and imam and an outspoken critic of Islam who fought for a freer and more humane world despite pressure from the state, the public, and even his own father, whose dream was to see him become a devoted clergyman.

Dursun was a prestigious mufti in the cities where he worked. His progressiveness and hard work were often covered by the national media and at times he also wrote columns for national newspapers. He was frequently invited to official state ceremonies and was respected by the public. He regularly visited the villages to observe their problems and tried to offer solutions.

Because Dursun received his education in madrasas (Muslim theological schools) and knew Arabic well, he had a comprehensive knowledge of the original documents of Islam: the Qur’an, hadiths, biographies and stories. And he had something of crucial importance that most Muslim scholars lack: a critical mind.

Islamic religious texts did not satisfy the back of his mind. He had an incredible passion for learning. Apart from his native languages, Turkish and Kurdish, he learned Arabic, Circassian and some French. He also had a keen interest in Greek philosophy and read the works of Aristotle when he was only 12 years old.

Knowledge builds up in your mind to a certain extent, and then a spark is emitted. But yes [your ‎religion or ideology] it is so deeply ingrained and conscious in your culture that it is difficult to confront and distance yourself from it. I always had a nature that rebelled against the concept of God and my disassociation from Islam took place in an evolutionary phase. He had always argued with God. Then I regretted it. I thought, for example, that if the Qur’an is the word of God, why does it allow slavery? Why do you tell some people that it is okay if they are slaves? I thought that if [the Quran’s author] he was really Allah, he should have abolished slavery and he should not have declared some people slaves and others free. But then I immediately abjured. I had always been in a state of rebellion since my childhood, ”Dursun said in an interview.

But his main departure from Islam occurred when he compared the Qur’an with other religious books.

Then I realized how Muhammad transferred some of the writings from the Torah and the Bible to the Qur’an. I was so frustrated and angry. I couldn’t live my childhood and youth properly because of him. Many people cannot live properly because of him. Many people suffer its disasters. Many people know what is right as wrong and what is wrong as right because they think that the darkness that he chose exists. Human emotions and human creations have not progressed in many ways thanks to him. I have found no disease, no cancer, no AIDS, and no more dire disaster than the effects of that religion. And at that moment, I decided to start a fight, ”Dursun said.

Dursun also left his job as a mufti, which he served for 14 years, to better dedicate himself to his cause.

“I quit my job so I could fight. I was at the peak of my career. He was no ordinary mufti. People knew me and respected me. But I had to quit that job. Because I thought if I was going to fight, I couldn’t do that with my current job because that wouldn’t be honest. I have always been consistent. I never want a difference between what I think and what I do. “

With these changes, Dursun’s father and siblings gradually moved away from him.

Then he started writing. His first problem was that no media outlet or publisher wanted to publish his articles.

In the preface to “This is Religion – Part 1,” he explained that period:

“I put a lot of effort into publishing these articles. I rang many bells. My attempts continued for months, if not years. They all rejected me. [These articles] he even intimidated people known as “progressives” or “intellectuals.” Even when my more moderate articles were presented to them, some of them said, ‘They can stone us to death if we publish them.’ Some of them were even afraid of being bombed, much less stoned. Some of them responded with the same rhetoric of tactical politicians: ‘We respect religion. We do not support the offense of religious sentiments. ‘

So, before our country and the world, I would like to document this (situation) and blame the ‘intellectuals’ who function as severe guards who are not very different from the sovereigns of the oppressive regimes that they accuse and as taps that prevent it from flowing. the water needed for liberation, ”said Dursun.

Eventually, Dursun was able to find a magazine to publish his articles and then a publisher to print his books.

Among the many topics she wrote about were violence in Islam, Islamic law, the status of women in Islam, Muhammad’s private life, contradictions in the Qur’an, “satanic verses” and the vengeance of the Islamists. He also focused on what he called “the irrational and unscientific matters of the Qur’an.” He wrote countless books and articles in the 1980s.

His son Abit Dursun said that every article his father wrote fell like a bomb. “My father enthusiastically faced taboos that no one in Turkey had dared to discuss,” he said.

A fatwa was even issued demanding the execution of my father. Then the magazine he wrote for called on all Islamic scholars to join a talk show on television with my father. But none of them volunteered because they knew that my father was one of the most prominent scholars of Islam, not only in Turkey but all over the world. And my father was not afraid, ”said Abit Dursun.

Turan Dursun’s knowledge was great and so was his bravery. But he did not write to harm, coerce, destroy or kill anyone. He had a cause, which he believed was to enlighten and liberate people to create a better world, where freedom and humanity would prevail. And his only weapon was the eloquence of his pen.

But his opponents did not share the same human values. As if to prove that Dursun was right about the violence of Islamic teachings, they were not limited to verbal or psychological attacks.

At 56, Dursun was brutally murdered by two gunmen outside his home in Istanbul on September 4, 1990.

After Dursun’s assassination, a book entitled “The Holy Terror of Hezbollah” was found in his bed. Family members said the book did not belong to Dursun and that people who entered his home left it on his bed as a message.

After Dursun’s assassination, plainclothes policemen took away many of his works, which he had been preparing, including the 2,000 pages of his Encyclopedia of the Qur’an, many of his manuscripts, articles, letters, and the fifth edition of his latest book.

”The police arrived at our house 45 minutes later. Plainclothes policemen who had arrived long before ransacked the entire house. As they were leaving after seizing my father’s works, uniformed policemen arrived. … Later we sought help from the prosecution, but we could not get those jobs back, ”said her son.

The police and the state opposed Dursun, and he was completely vulnerable. But it was also abandoned by many of Turkey’s intellectuals. After all, not everyone had their brave hearts and free minds.

Abit Dursun gave a speech at her father’s funeral:

“Turan Dursun always said ‘I’m not afraid of the dark. I am afraid of being afraid. Because someone who is scared or afraid or becomes aggressive. Those who killed my father fiercely shot him in the back, not even daring to look him in the eye, “he said.

After Dursun’s assassination, his books sold tens of thousands of copies in Turkey. His followers have described him as a “warrior of enlightenment”, one of the most deserved titles in history.

Dursun was assassinated years ago, but the silence and indifference of the West, the free world, in the face of Islam remains deafening.

The term “Islamophobia” has been invented to muzzle critics of Islam so that Islamists’ feelings are not offended. Even genuine supporters of this term should be well aware of the fact that the slightest and mild criticism of Islam can provoke backlash from “peaceful” Islamists.

This is why Alan Dershowitz was so right when he said: “The threat or fear of violence must not become an excuse or justification for restricting freedom of expression.”

Why do we fear a backlash from Muslims if we make substantial criticism of Islam? Isn’t Islam a religion of peace, as many claim it to be?

Apologists for “Islamophobia” should also answer these questions: What thoughts are included and guaranteed in the realm of free speech? What thoughts are free and which ones are forbidden? To what extent can Islam be criticized and on what issues should one be silent? Can we get a list of dos and don’ts, and if so, how would it contribute to human progress?

The suppression of criticism of Islam and Islamism is aimed at restricting the capacity of the human mind. But we no longer live in the 7th century. In the 21st century, silence cannot be demanded from freethinkers.

Uzay Bulut is a Turkish journalist and political analyst who previously resided in Ankara.